The World Congresses against the Death Penalty, launched by ECPM in 2001, are a highlight in the calendar of the global abolitionist campaign. Held every three years in a different strategic city, the 8th edition will take place in Berlin, from 15 to 18 November 2022. 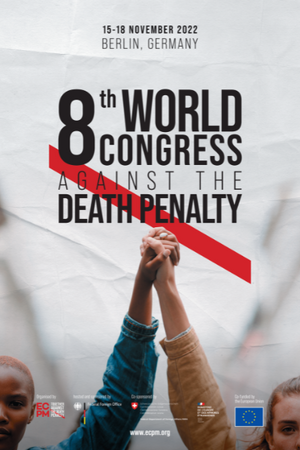 In Berlin or online, don’t miss a thing of the 8th World Congress !

Download our free bilingual app : “8th world Congress” on App Store, Google play or browse it on the web at congress.ecpm.org and find all the information about the event. To be notified of a change in the program or the start of a session, remember to allow notifications from the application when you first open it.

For over twenty years, World Congresses have been an opportunity for abolitionists to join forces to prepare tomorrow’s struggle. At each World Congress, ECPM innovates to ensure that new audiences take ownership of the death penalty issue: in Madrid, in 2013, the role of parliamentarians was highlighted; in Oslo, in 2016, national human rights institutions (NHRIs) were involved for the first time; in Brussels in 2019, a new debate with the private sector and business was initiated. This year, in Berlin, ECPM is giving a voice to the younger generation, the pillar of the universal abolition of the future.

ECPM’s World Congresses aim to take stock of progress towards universal abolition and the difficulties encountered along the way. They are a unique opportunity to assemble actors working for abolition at the local, regional and international levels, who are in a position to contribute effectively to the elimination of the death penalty from judicial and legislative arsenals: activists, lawyers representing death row prisoners, political leaders and diplomats, parliamentarians, former death row prisoners and victims’ families.

Over the past twenty years, the World Congresses have become the essential meeting place for abolitionists from all over the world. Every three years, they come together in a different city to advance the cause of universal abolition: in 2004 in Montreal (Canada); in 2007 in Paris (France); in 2010 in Geneva (Switzerland); in 2013 in Madrid (Spain); in 2016 in Oslo (Norway); in 2019 in Brussels (Belgium); and in 2022 in Berlin (Germany).

This major triennial gathering undoubtedly contributes to promoting the sense of being part of a global movement, especially for the most isolated members of civil society, who are most often active in retentionist countries. Many of them testify to the impetus generated by the Congresses to pursue their efforts, drawing on the advice and good practices collected within the abolitionist community, which is structured as an interactive network.

In order to ensure the best possible preparation for the World Congresses, each is preceded by a regional congress to focus attention on a particular region of the world: in 2012 in Rabat (Morocco); in 2015 in Kuala Lumpur (Malaysia); and in 2018 in Abidjan (Côte d’Ivoire). The 2021 regional congress could not take place due to the Covid-19 pandemic but will be organised at a later date.

The 8th World Congress against the Death Penalty will take place in Berlin from 15 to 18 November 2022: more than a thousand participants from 90 countries are expected in the German capital for the most important abolitionist event. Over four days, political figures, activists and committed citizens will come together to debate the main issues related to the death penalty in the world.

The challenge in Berlin will be to strengthen the international cohesion of the abolitionist community and to make this Congress the first major post-Covid event.

Ramla liatouji, coordinatOR OF THE WORLD CONGRESS. READ THE INTERVIEW

Numerous key witnesses, former death row prisoners and civil society figures will take the floor at various venues in the city, including the Radial System, Berlin’s cultural nerve centre, which will host the abolition village, workshops, debates and conferences. A plurality of activities and actors linked by a common objective: to strengthen the struggle for universal abolition of the death penalty.

ECPM has been travelling through six retentionist countries in Africa, Asia and the Middle East to reach out to young abolitionists. Workshops, tools, exchange of best practices… the future of the struggle is ensured!