There is a universal trend towards the abolition of the death penalty as has already been recognised by the twothirds of countries around the world that no longer apply it. Since to oppose the death penalty is to maintain our humanity and dignity in the face of barbarism, since to refuse a State the right to kill those it is supposed to take care of is to preserve the basis of our freedom, ECPM has put together 10 arguments of the abolitionist struggle. 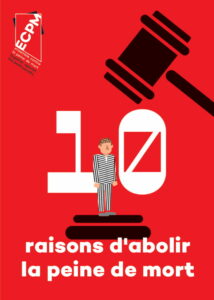 We are in favour of abolition because the death penalty is…

The right to life is a fundamental right enshrined in several international human rights conventions.

It is ineffective in fighting crime and does not make society safer. When a state deems life to be of no value, it spreads this idea among its citizens, not making its society safer.

It perpetuates the cycle of violence and suffering, where justice aims instead to organise reparation of the situation in order to restore balance and peace in the community.

Miscarriages of justice exist, so the death penalty can kill innocent people. Lack of resources, capacity and independence of police forces and the judiciary are the main reasons for death sentences.

Appalling detention conditions, psychological distress and execution methods: the death penalty is a cruel, inhuman and degrading form of punishment.

Defendants from disadvantaged backgrounds face two problems: lack of financial means to defend themselves and lack of knowledge of the legal
system necessary to understand what is at stake in their trial and how the justice system works.

A tool of political repression

It is used as a tool of repression (against the population) and to exert pressure (between countries). Many countries apply it as a means of political and/or religious repression: you do not demonstrate against government policy, when simply expressing your opinion is enough to send you to the scaffold.

The death penalty creates new victimes. Not only do death sentences fail to provide relied to the relatives of victims of the original crime, but they also extend the suffering and trauma to the families of those sentenced to death, as well as to the jurors, lawyers, judges, etc. involved in the case.

An obstacle to the truth

The death penalty is not supported by all families of victims and does not ensure reparation. Many victims and/or their families call for truth, not death. Above all, they want to understand, to know and to see justice done.

The death penalty is a denial of the capacity for reintegration of each and every one. A socially useful life remains possible for all prisoners. This is an important objective of justice, which should rehabilitate the perpetrators of
offences and provide reparation in order to restore balance and peace in the community.

To better understand the issues related to the death penalty in the world, ECPM and the artist Marty Planchais have produced a video, an excerpt of which is shown below, which is also shown in classrooms during school presentations.