Vote for a universal moratorium

Since 2007, every two years, a resolution for a universal moratorium on the use of the death penalty has been put to a vote in the United Nations General Assembly (UNGA).

With this text, adopted on each occasion by a large majority of States, the UN reaffirms that the use of the death penalty violates human dignity and calls upon all States “to establish a moratorium on executions with a view to abolishing the death penalty”.

To date, eight resolutions have called for a universal moratorium on executions, with an increasing number of states voting in favour each time. On 16 December 2020 the UN General Assembly voted by an overwhelming majority (123 states) in favour of the resolution “Moratorium on the use of the death penalty” at its 75th session. Expectations are high for the next vote, scheduled for December 2022 in New York. The international community expects each country to vote in accordance with its national situation. 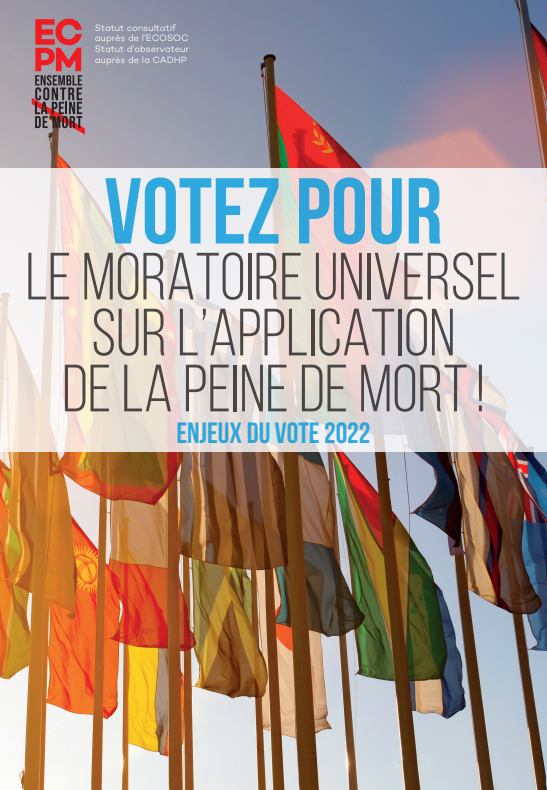 What weight does the moratorium resolution carry?

As the resolution is not legally binding, it cannot prevent a state from carrying out an execution or sanction it for doing so. However, a powerful call from the highest political body in the UN carries considerable moral weight and is a valuable tool in the quest for a death penalty-free world.

The 2020 resolution introduced new elements to strengthen the text and call on states to improve protection of the rights of those facing the death penalty. The text stresses the need to “improve conditions in prisons” and recognises “the discriminatory application of the death penalty to women”.

The text is also more protective of minors, with the UNGA calling on states not to impose the death penalty on persons “whose age above 18 years at the time of the commission of the crime cannot be accurately determined”, and adding a new paragraph on the rights of children whose parents are on death row.

Finally, the 2020 resolution recognises the role of civil society “in contributing to ongoing local and national debates and regional initiatives on the death penalty”.

The moratorium resolution at a glance

Infographic : The UN moratorium for universal abolition at a glance